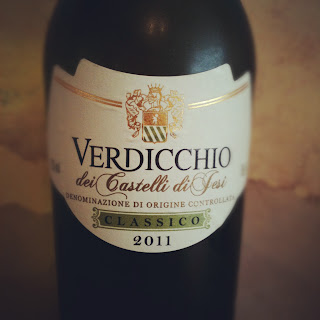 
What draws you into deciding on a particular bottle of wine?  Do you think the shape of the bottle or aesthetic appearance of the label has anything to do with your decision?  I'm sure you have heard that the shape of Coca-Cola bottles are supposed to mimic the female form, designed to stir primeval senses and influence your choice.  Whether this is entirely accurate, I leave for you to tell me, but I do know that if I am stuck between two bottles, I will start to judge on what I can see.  If the bottle shape is pleasing and the label looks like it has been put together with care, this will score extra brownie points and will most likely tip the balance. This would be wine choosing at it's most superficial as these features contribute nothing to the taste or quality of the wine inside. While a book should not be judged by it's cover, neither should a wine.

Another new grape for the Everyman, Verdicchio is grown widely in central Italy and is named in part for the green hue it can give some of the wine it produces.  Verdicchio is the principal grape behind two Denominazione di Origine Controllata (DOC) wines in the provinces of Ancona and Macerata, Verdicchio dei Castelli di Jesi and Verdicchio di Matelica.   The other featured grape is Trebbiano which is widely grown throughout the world and is used primarily for blending with other wines as it has a high producing yield but is largely indistinguishable on it's own, making good quality varietals rare.  Interestingly, it is instrumental in the making of cognac.

One of the first things I noted when smelling this wine was the distinct lack of fruit.  Usually, there is a tell-tale sign of something but this wine simply did not have anything there to report.  Instead, a fresh and clear nose which leans more towards grass of the lush, green, dew soaked variety as opposed to dry and dusty, or hay.  The overall sensation is one of subtlety and there is a tinge of sweetness, although too faint for my nose to identify.  Nicely smooth on tasting, the palate isn't offered any significant or dominating taste but rather a notion of neutrality.  Dry but not overtly acidic, the wine keeps within herbal influences and perhaps a tip of the hat towards quince and orange although very difficult to draw on.  The taste remains balanced but sustained right through to the medium length aftertaste where it fades away rather than decaying.  Overall, a balanced and consistent wine that would feel out of place as the centre of attention but would quite easily be a flexible eating partner.  The neutral structure would make it especially good with delicate foods.

On some level, I am sure we have all made a judgement from what we have seen on the surface.  My choice this week was won by the uncommon shape of the bottle.  Now what does that say about the wine inside? Or me for that matter!
Posted by Everyman Wines at 08:50

Everyman Wines
I am a lover of wine, just like you. I have no formal qualifications in the wine industry, just a thirst for knowledge and the understanding of what makes a good wine and why I would like it. My mission: to convey my honest opinion of wine that is within easy reach to all, in a small, informative and sometimes humorous fashion. Imagine being stood in the supermarket looking for quick inspiration. My blogs are designed for you.